Joyful Honda makes contributions to sustainable community development. In addition to the provision of goods and services in our stores, we are also engaged in a wide range of activities to enrich local communities.

Back-up Function at Times of Disaster Supply of Goods to Local Community

Joyful Honda stores were also affected by the Great East Japan Earthquake of March 2011. However, to meet the needs of the many customers who came to our stores after the disaster, almost all of our stores in the area secured a safe space and resumed business just hours after the earthquake, using generators for electricity and taking other necessary steps. The only exception was our Newport Hitachinaka Store, which suffered major damage, but it too re-opened for business the next day. To provide customers in the area with torches, drinking water, and other essentials that were in short supply, the entire company banded together to secure supplies and provide operational support. Joyful Honda sent 116 employees for a period of thirteen days to Joso City in Ibaraki Prefecture, which suffered damage in the torrential rains that hit the Kanto and Tohoku regions in September 2015. The volunteers spent a total of 800 hours working mainly to clear up the trash that had been swept through the city, remove mud, and clean homes and gardens.

Contributions to the local community 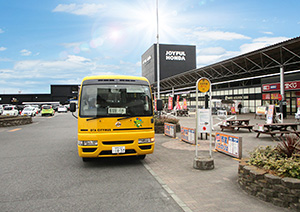 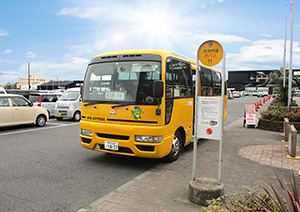 Cooperating with a free bus service operated by Ota City

Following a request from Ota City, the Company provided a bus stop and waiting facility for shuttle buses on the premises of Nitta Store, Joyful Honda Home Center, located near the mid-point of the new route.

The Company cooperates not only for customers, but also local residents in general to enhance their convenience through support that the Company, as a large home center business, can uniquely provide. With the cooperation of the Tsuchiura City Social Welfare Council, Joyful Honda has started operating Joyful-Go, a free loop shuttle bus that travels around the city. The bus travels along multiple routes that together cover the entire city, with two services a day, one in the morning and one in the afternoon, on each route from Monday to Saturday (12 services a week) to and from Joyful Honda Arakawaoki. The bus can be used by anyone aged 60 years and over, regardless of whether or not they are resident in Tsuchiura, features an onboard karaoke set. Our aim is for the service to become a community bus whose passengers can enjoy themselves on the ride there and back. Joyful Honda supports the Moriya On-Demand Shared Transport system operated by the Moriya City Regional Public Transport Revitalization Council. Customers aged 65 years and over, customers who hold a Disability Card, and other eligible customers who use this system to shop at Joyful Honda Moriya are given a discount coupon, which can be used for the Moriya On-Demand Shared Transport. The value of the discount will depend on the value of their purchases.

So that many customers can enjoy shopping, Joyful Honda is pursuing the expansion of activities that help the elderly and other people who have no means of transport to reach our shopping centers. Joyful Honda supports Kamitan-Go, the on-demand transport system operated by the Kaminokawa-machi Regional Life Division’s Life Section. Customers who use this system to shop at Joyful Honda Utsunomiya are given a discount coupon for use on Kamitan-Go. The value of the discount will depend on the value of their purchases. 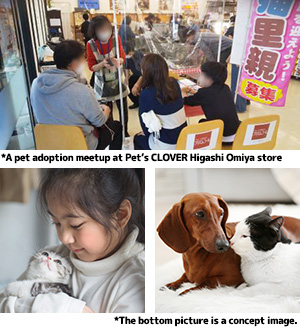 Supporting the activities of cat and dog welfare groups

The Company has begun supporting the activities of pet adoption meetups for shelter dogs and cats, together with RENSA, a general incorporated association with a wealth of experience in creating opportunities for potential pet adopters to meet shelter cats and dogs, and SBI PRISM SSI Co., Ltd., a pet insurance company.

Specifically, the support includes providing a place to hold pet adoption meetups (the Company’s store facilities), notifications concerning the meeting, and operational assistance on the day.
In the hope of reducing the number of unfortunate dogs and cats that have yet to find a home for a variety of reasons, the Company will continue to cooperate with its partners on cat and dog welfare activities. *Japanese-language homepage on the website of University of Tsukuba Soccer Club:
https://www.tsukubashukyu.com/ Tsukuba FC is a club aiming to create an environment where people ranging from children to adults, including women, can enjoy playing football throughout their lives. The Company contributes to promoting regional sports by supporting the leading team, Joyful Honda Tsukuba FC, which belongs to the first division of the Kanto Football League.

Official Partner of the Kasumigaura Marathon

The Company is an Official Bronze Partner of the Kasumigaura Marathon and International Blind Marathon 2019, which was held on April 14, 2019. Special Co-Sponsor of the “Moriya Half Marathon”

The Company supported the “Moriya Half Marathon” held on February 9, 2020 as a special co-sponsor.

*Japanese-language homepage on the website of MORIYA HALF MARATHON:
http://www.moriya-half.jp/